“At first glance, it might seem puzzling that the Kellogg-HKUST EMBA program set up a scholarship in 2010 specifically for leaders in non-profit organizations, but the logic soon becomes apparent.”

“In essence, business is changing, with the result that executives in the “traditional” corporate world are no longer judged by just the familiar measures like market share, sales growth, stock price, and return on investment. The broader community now expects to see plans and action across a diverse spectrum of social and environmental issues.”

“Resulting from that are closer ties and new working relationships between the business and non-profit sectors. The two need to understand each other’s methods, perspectives and priorities, so as to enhance co-operation, effect meaningful change, and put available funding to the best possible use. And one of the best ways to start is by bringing together people from those different backgrounds to discuss approaches and explain respective viewpoints in the classroom.”

“The first time I described my job and asked for questions, I think everyone in the class put their hand up,” says Robert Palmer, current holder of the NPO scholarship and a strategic communications consultant who has worked on numerous projects around the world for the United Nations. “I didn’t expect that, but it showed the level of interest in non-profit initiatives and how having someone from that sector can create a different dynamic in the class.”

“Recent work assignments have taken Rome-based Palmer to Yemen where, for instance, he helped design a project to get the views of women and girls as part of the National Dialogue linked to the writing of a new constitution. To accomplish this, a bottom-up communication pipeline between the Yemeni people and decision makers was built by developing a strong countrywide network of Yemeni NGOs dealing with women-related issues. These NGOs conducted face-to-face meetings all across the country to  get people’s feedback on issues linked to women and girls and informing them about the National Dialogue process and their role. In addition, a diverse team of well-respected Yemeni gender issue experts and leaders were brought together as a ‘Community Coalition’ to engage decision-makers on women’s issues at the national level.”

“The project started with just a small amount of seed money, but quickly and exponentially grew,” he says. “The goal is to build civil society, ensuring that women and children are an integral part of the emerging democratic process.”

“The next step will be to set up ‘Community Action Committees’ in the various Yemeni governorates to engage with government officials at the local level. In this way, women’s voices will be heard at all levels of governance and community planning; the project is also expanding to include other disenfranchised groups to encourage peace building, allowing people around the country to have a say on issues which affect their lives.”

“Palmer has also been involved in advising the government on best practices for conducting a national census in Yemen, the results of which will ultimately help in devising economic policies and prioritising investment schemes.”

“To develop, countries need private sector investment,” he says. “For things to run well, people in business and finance have to know how the public and non-profit sectors work – and vice versa. These areas are now very inter-related, so each sector needs to know what the others do and why.”

“That necessity largely explains Palmer’s own decision to apply for the Kellogg-HKUST EMBA. On the one hand, he could see the importance of adopting proper business models and practices to account for every dollar received or spent. On the other, since the development community increasingly depends on the private sector for expertise and funding, it made obvious sense to speak their language when looking to inspire interest in various appeals or proposals.”

“Also, the UN is changing” he says. “We need to become better at doing more with less.”

“With these aims in mind, Palmer regards the program as “the perfect fit” for him. As an American, he appreciates the power of the Kellogg brand, but he also sees how the partnership with HKUST opens the door to the region and China. Indeed, the mainland is where the some of greatest gains in food security and poverty alleviation have been made in the last 30 years, transforming the lives of millions of people. In a short time, the country has gone from being a foreign aid recipient to a major donor, making it of special interest for anyone in the NPO world.”

“In the program, I’m learning from people in different sectors, and there is a unique dynamic because Asia is where many of the world’s major developments are happening. Palmer says. “Of course, I couldn’t have done it without the help of the scholarship; it is essential for people in my field.” 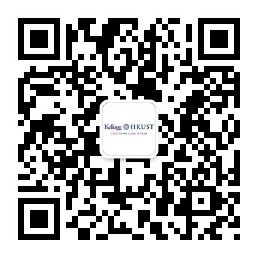